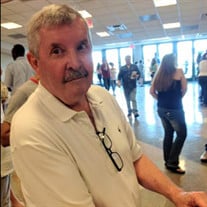 Robert “Bob” Kenneth Roden of Flower Mound, Texas went to his heavenly home November 16, 2020 at the age of 81 in Gainesville, Texas. He was a believer in Jesus Christ. Born January 1, 1939 in Centrahoma, Oklahoma to the parents of Peggy McKinney Roden and Raymond Roden. He graduated from Del City High School where he made the varsity baseball team as a sophomore. Economic realities ended his baseball career and jump started his working career in the grocery business. He worked his way up from butcher to meat market manager. An opportunity with Topper Toys launched him in the toy business. He went on to work as a salesman for many iconic companies like Milton Bradley and Aurora selling to retailers headquartered in the southwest like TG&Y, Gibsons, and Walmart. He eventually started his own business as a Manufacturers Representative for multiple toy companies like Hedstrom, Lionel Trains, Estes Rockets, Guillow’s Airplanes, et al. He worked many years out of the World Trade Center in Dallas. After Bob retired he realized he had spent over 2 years of his life in New York City while attending the annual Toy Fair for multiple weeks throughout his long career. He loved the time he spent in NYC and knew it like he lived there his whole life. He loved OU Football and attended many games with family and friends. He especially loved the annual OU vs Texas game in Dallas and attended his first game in 1960. He enjoyed handicapping horse races, playing golf, and spending time at Lake Murray with his family. He was an excellent cook and gracious griller of rib-eye steaks, hamburgers, and other tasty treats. Bob always shopped the weekly deals and took pride in stretching the grocery dollar until it screamed for mercy. He was never afraid to show his skills in baking as well. He was survived by his wife of 32 years Anita Roden; and his children, Robert Roden, Jr, Mark Roden & his wife Jennie, Robin Roden, Ronnie Roden & his wife Kelley, Darren Roden & his wife Shara, and Shelli Roden Flewelling & her husband Bill; his brothers Raymond Roden, Jr & his wife Jackie, John Roebuck, Jr; his sisters, Linda Bryant, Barbara Smith; his grandchildren, Randi Roden Jones & her husband Chris, Robby Roden & his wife Kasie, Elizabeth Roden Graham & her husband Jack, Lance Roden, Marisa Roden, Alexa Roden, Britney Roden, Bailey Roden, Emma Roden, Ashlyn Roden, Charli Roden, Chesley Roden, Kennedi Flewelling, Makenzie Flewelling; his great-grandchildren, Mason Jones, Landon Jones, Emily Roden, Abigail Roden, Hailey Roden He was preceded in death by his daughter Deborah Roden Eilts & her mother Rena Gilley Hammons; his father Raymond Roden; his mother, Peggy Roden Roebuck & step-dad, John “Jack’ Roebuck; his brother, James Alexander Roden; his sister, Peggy Lane & her husband John Lane; his brother-in-law, Harold “Curly” Bryant. His family would like to thank all his caregivers at River Valley Nursing and Rehabilitation Center where he lived the past few years. A memorial service will be held at Hillwood Chapel, Saturday December 5, 2020 at 3:30 pm in Denison, TX at 336 Sheryl Lane. Reverend Wayne Johnson will officiate.

Robert &#8220;Bob&#8221; Kenneth Roden of Flower Mound, Texas went to his heavenly home November 16, 2020 at the age of 81 in Gainesville, Texas. He was a believer in Jesus Christ. Born January 1, 1939 in Centrahoma, Oklahoma to the parents... View Obituary & Service Information

The family of Robert Kenneth Roden created this Life Tributes page to make it easy to share your memories.

Send flowers to the Roden family.