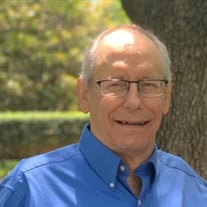 Dennis Michael DeVaney of Denton, Texas went to his heavenly home on October 30, 2020, at the age of 59. He was born on February 4, 1961, in Amarillo, Texas to Will and Ann DeVaney. He married the love of his life, Rhonda Yvette Guinn, on September 3, 1988, in Austin, Texas. Dennis was a caring man devoted to his family. He enjoyed traveling with his wife and family, cherished the holidays, and adored seeing the excitement on his daughter-in-law’s face. Dennis, who was known as the Scouting cook, most enjoyed being active in Boy Scouts with his sons. He was grateful Scouting taught his children character and leadership skills that prepared them for life as adults. Dennis worked in the retail industry for many years. His love for cooking prompted Dennis to open his own restaurant, Fullhouse Smokehouse, in Lewisville, Texas. After closing the business, he went on to another self-employed business distributing waffle mixes to hotels and restaurants within the Dallas/Fort Worth metroplex. During the final year of his life, Dennis enjoyed working with and mentoring his sons in a real estate investment company flipping homes. Dennis is preceded in death by his parents, Will and Ann DeVaney. Left to cherish Dennis’s memory are his wife of 32 years, Rhonda DeVaney of Denton, Texas; his son and daughter-in-law, Michael and Margaret DeVaney of Little Elm, Texas; his son, Kyle DeVaney of Little Elm, Texas; and his son, Patrick DeVaney of Little Elm, Texas. Additional survivors include his sister and brother-in-law, Debbie and John Newton of Austin, Texas; sister and brother-in-law, Donna and Richard Cranford of Keller, Texas; sister-in-law and husband, Deborah and Mark Anderson of Plano, Texas; brother-in-law, Chris Guinn of Denton, Texas; mother-in-law, Odella Guinn of Mesquite, Texas; father-in-law, Mafes Guinn of Denton, Texas; niece and nephew-in-law, Adrienne and Dustin Nelson of Pueblo, Colorado; niece, Elliott Newton of Austin, Texas; nephew, Zach Newton of Austin, Texas; nephew and niece-in-law, Brandon and Broocke Anderson of Canton, Texas; nephew, Ryan Anderson of Eustace, Texas; nephew, Matt Anderson of Eustace, Texas; two great nieces and one great nephew, all of whom he loved dearly and who loved him dearly in return. Dennis will be deeply missed! In lieu of flowers, please consider making a donation to the American Lung Association.

Dennis Michael DeVaney of Denton, Texas went to his heavenly home on October 30, 2020, at the age of 59. He was born on February 4, 1961, in Amarillo, Texas to Will and Ann DeVaney. He married the love of his life, Rhonda Yvette Guinn, on September... View Obituary & Service Information

The family of Dennis Devaney created this Life Tributes page to make it easy to share your memories.

Dennis Michael DeVaney of Denton, Texas went to his heavenly...

Send flowers to the Devaney family.