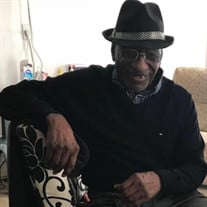 Clifton Russell, 97 was born April 6th, 1924 to James Russell and Jennie Man Hill Russell in Ellis County. He accepted Christ at an early age. Clifton served in World War II. After leaving the Army, he began a career working with the City of... View Obituary & Service Information

The family of Clifton Russell created this Life Tributes page to make it easy to share your memories.

Send flowers to the Russell family.